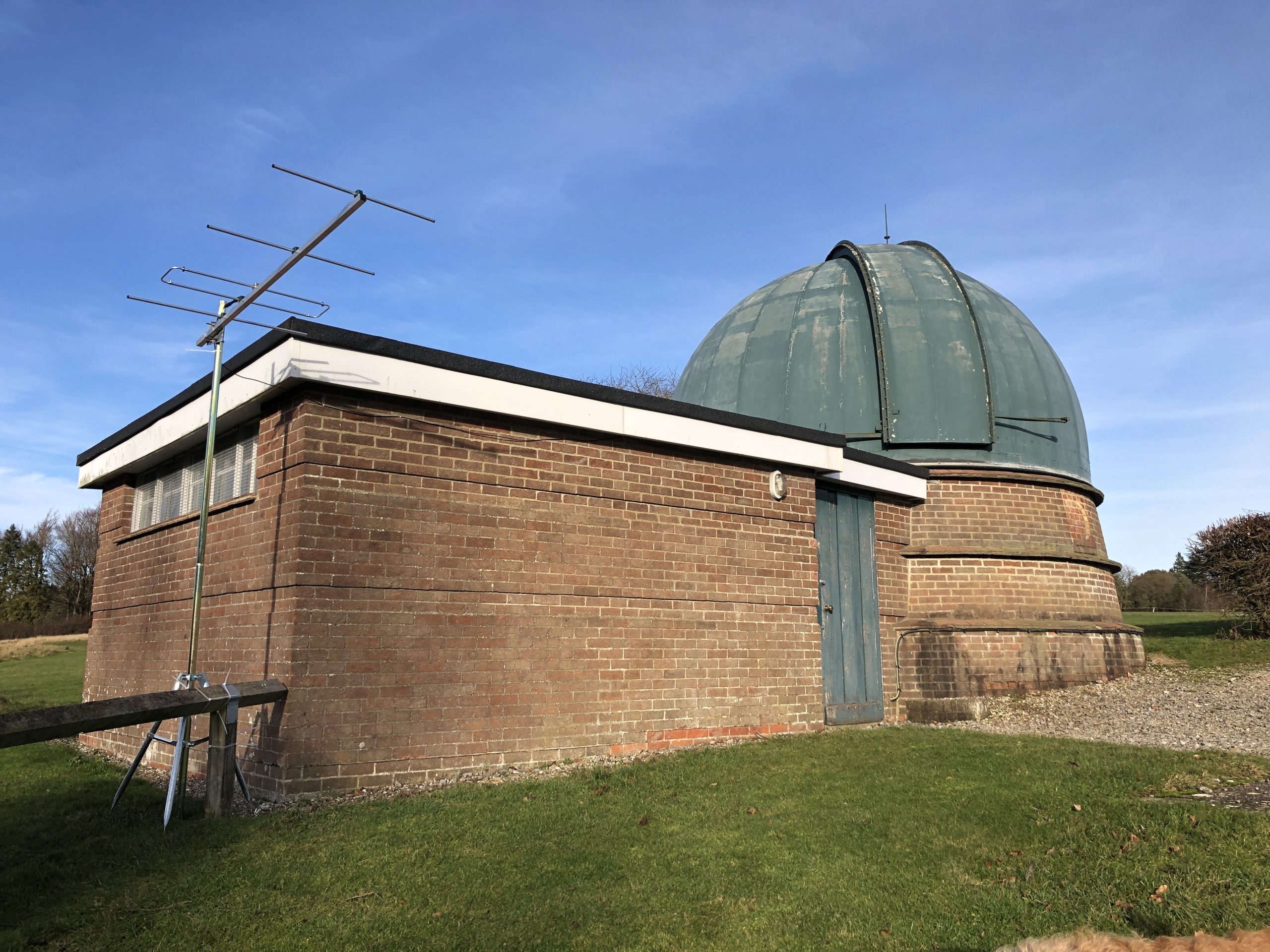 FIND OUT MORE      Become a Friend

Visit the What’s Up! archive

The Latest View from the MCBO

The All Sky Camera operates from 30 minutes after sunset through the night until 30 minutes before sunrise. The latest image will be updated automatically every 5 minutes and the time lapse video is refreshed each morning at around sunrise. You can click the still image to open up a larger version, but please be aware that it will not automatically update until you return to this page – you can always manually refresh the page 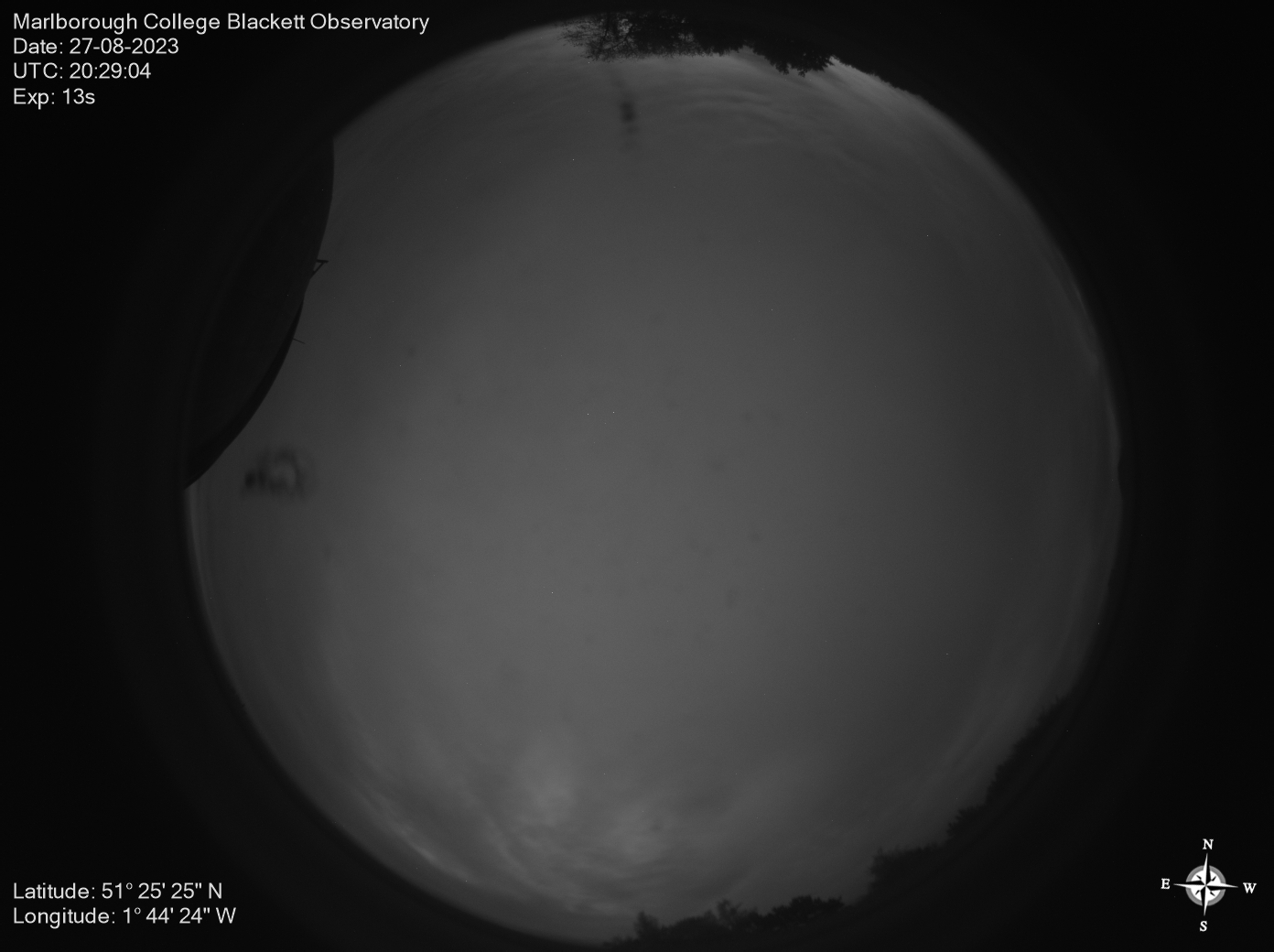 Outreach visit: 14 Cubs and 3 Cub Leaders visited the Dome with GKWJ. It was cloudy
House visit: Due to multiple Covid absences the visit was run over Zoom with CEB cold at the Dome and all the C1 Shell pupils warm in their own rooms or at home. The evening was cloudy
Next House visit: Thursday 20th (NC)

Radcliffe Society: 16 members joined GKWJ, JAG & CEB at the Dome. A cold and clear evening allowed the meeting to take place at the Dome for the second month running. The full Wolf Moon drowned out all but the brightest targets. The Full Moon was observed through the 10-inch, including with the diagonal and eyepiece removed, allowing the Moon to be ‘held’ in the palm of the hand and its warmth felt. GKWJ set up the 8-inch outside to demonstrate how to capture stellar spectra; five bright stars (Capella, Menkalinan, Rigel, Alnitak and Betelguese) were targeted. The data were then processed on a laptop attached to a projector in the classroom, allowing members to follow along with the procedure. The spectra were calibrated and plotted together, allowing the differences between spectral classes to be clearly seen
Next meeting: 28th February

House visit: 13 Shell pupils from MO and a Tutor came up to join CEB at the Dome for the first clear Shell night in some time. The waxing Gibbous Moon made for a very light sky and prominent lunar shadows. Polaris and the Saucepan and Orion with Sirius and Betelgeuse were identified along with M32 Andromeda Galaxy just discernible with averted vision. The 10-inch tracked M42, the Orion Nebula where the Trapezium was clearly seen, though the nearby Moon made the nebulosity very faint
Next House visit: Tuesday 18th January (C1)

GCSE observing: All bar two Remove GCSE astronomers came up to the Dome to join CEB and GKWJ. Small instruments were used outside to do drawings of the 83% Moon and then high magnification (x235) drawings of the crater system Gassendi were done through the 10-inch

Outreach visit: 12 Scouts with 2 Scout Leaders and a Parent Helper visited the Dome with GKWJ. A clearing sky and cold conditions allowed the 77% Waxing Gibbous Moon to be viewed in the 10-inch. Outside, the group enjoyed a sky tour, identifying the Plough, Polaris, the W of Cassiopeia, Alcor and Mizar, Orion and the Orion Nebula (M42)

GCSE observing: All bar one of the Remove astronomy set came up to the Dome to join CEB and GKWJ. Sadly the sky clouded over and remained cloudy until they all left

House visit: The first Shell visit of the year took place as 13 pupils form MM joined CEB at the Dome. Small gaps in the clouds allowed brief viewing by eye of Betelgeuse and Orion, Castor and Pollux, the Pleiades, the Saucepan and Polaris.
Next House visit: 13th January (MO)

Outreach visit: 14 Scouts with 2 Scout Leaders visited the Dome with GKWJ. It was cloudy

Friends observing: Unfortunately, cloudy skies prevented the Friends from observing the Winter Wreath, but around 20 Friends joined CEB, GKWJ & JAG on Zoom to enjoy a presentation and Q&A session on the topic of ‘Comets’ instead

Have you ever seen the Pleiades star cluster? ...read more

How different does the universe look on very small scales? ...read more