Friends observing: A group of 10 Friends, including several new members, joined CEB, JAG and GKWJ for an evening of planetary observing through the 10-inch. Saturn was seen first, with two moons (Titan and Rhea), next was Jupiter with its four Galilean moons. We then slewed to Neptune and finally Uranus. Outdoor observations included an overhead ISS pass, the rising Waning Gibbous Moon and the Pleiades through binoculars

Friends 17th annual drinks: The Friends of the Marlborough Telescope were thrilled to gather at the Dome for the first time in two years. A beautiful evening saw a large number of the outreach group, including several new members, get together for our annual drinks and nibbles

Imaging: GKWJ stayed at the Dome after the drinks to capture some better data of Saturn through the 10-inch. The planet was much higher, at about 17° altitude, giving significantly more stable seeing and far superior quality data

House Visit: The season started well with a clear sky to welcome 8 Shell pupils from B1. They were introduced to the facilities of the Blackett Observatory by GKWJ. The group first observed Saturn through the 10-inch, followed by Jupiter. As the sky darkened, the Plough, Polaris and Cassiopeia were pointed out to them. Next visit: Thursday 30th September (BH)

GCSE Observing: 13 GCSE Astronomy pupils (plus a budding astrophotographer) from the Hundred joined GKWJ at the Dome. On arrival, they looked West to see an overhead ISS pass, noticing it redden as it was eclipsed by the Earth’s shadow. They were taken on a tour of the night sky, with a series of questions to test their naked eye observing knowledge. The group then moved to the 10-inch to observe Jupiter, with the Great Red Spot, clear banding and 4 moons visible, followed by Saturn and Titan

Imaging: GKWJ remained up at the Dome to image through the 10-inch, capturing good data of Jupiter with 3 moons and then moved to Saturn, though the planet had sunk low to the horizon by this time, resulting in a poor quality image

GCSE Observing: 13 members of the Remove GCSE Astronomy set came up to the Dome for their first observing session with GKWJ. The session started with an overhead ISS pass, we then moved to the 10-inch to observe Saturn and its moon Titan. They were introduced to observing and sketching techniques and made a wide-field sketch of The Plough, Polaris and the W asterism of Cassiopeia. The group then observed Jupiter through the 10-inch, where only 3 Galilean moons were visible as Io was occulted. Europa was also occulted later in the evening

Imaging: Inspired by the recent planetary imager visit, GKWJ set up the 10-inch with planetary camera and atmospheric dispersion corrector to attempt an image of Jupiter. A reasonable image of Jupiter with moon Europa was obtained and a time lapse of the occultation of Europa was made from all the captures

Radcliffe Society: The first meeting of the new academic year was held at the Dome and 15 members of the society enjoyed an evening of observing with GKWJ, CEB and JAG. GKWJ presented the What’s Up for the coming weeks and future plans for increased pupil participation were discussed. Clear, though hazy skies allowed views of Saturn, with moon Titan clearly visible, and Jupiter with banding on its surface and its four Galilean moons spread out in a neat line to be seen through the 10-inch. Next meeting: 8th November

Observing visit: GKWJ hosted a visitor at the Dome, recounting the history of the Blackett Observatory and the Cooke 10-inch telescope. A second night in a row of near perfect dark and clear conditions allowed a fabulous observing session, starting with the planets: Saturn and 5 moons, Jupiter and 4 moons and Neptune. Next up were M15 (globular cluster), M31 (Andromeda Galaxy, with spiral arm detail observed), Almach (beautiful double star in Andromeda) and the Double Cluster. Finally, the visitor, who is an expert planetary imager, gathered data of Jupiter through the 10-inch to create this fantastic image: 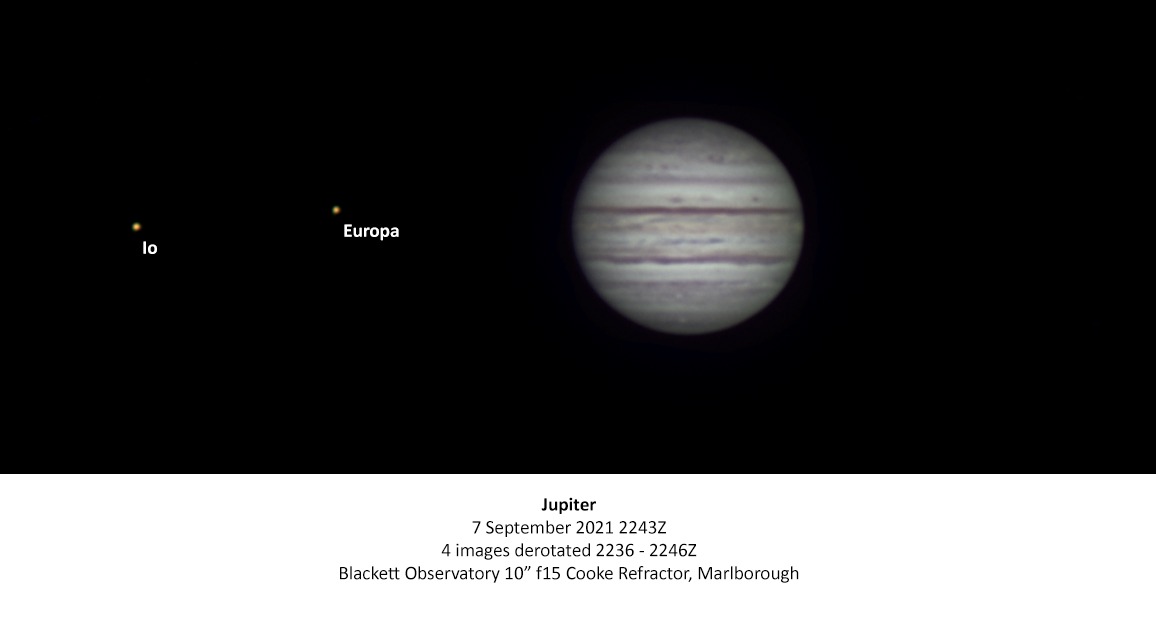 Observing: GKWJ & JAG saw in the start of the new academic year with a great observing session through the 10-inch. Wonderfully clear skies, no Moon or wind and near perfect seeing gifted the finest views of Saturn and 5 moons at up to x237 magnification, Jupiter with the GRS and its 4 Galilean moons, including a moon shadow transit of Io and finally the pale blue disc of Neptune. GKWJ then took images of the Milky Way over the Dome

Milky Way over the Dome