Friends Observing: The forecast was very mixed for this evening and a Cloudy Alternative was ready to be delivered should the need arise. As the small group of 8 Friends were arriving at the Dome to join GKWJ and JAG for the Double Stars observing session, there were sufficient breaks in the cloud to allow a view of Jupiter through the 10-inch, with 4 Galilean moons visible. The cloud breaks persisted, so the exploration of Doubles started with Almach (Gamma Andromedae) and Albireo (Beta Cygni), two similar doubles. Magnification started at x90, but thankfully the sky was clearing and seeing was relatively steady, so magnification was upped to x140 with great success. Next was Epsilon Lyrae, the Double Double and an increase to x220; both component systems, with separations of 2.2″ and 2.4″, were quite easily split at that magnification. We moved to the lovely Gamma Delphini and on to a new target, 8 Lacertae, which is a clear double in amongst a rich star field. The final double, Mu Cygni, was a challenge at only 1.4″ separation, but at x220 it was successfully split, just. We then returned to Jupiter, noticing the change in position of the 4 moons and the emergence of the Great Red Spot (GRS). Experiments were carried out with various Parks filters and all present concurred that a No. 56, green filter, gave the best enhancement to the GRS and cloud bands. The final target was Mars, rising in the East, a fine orange-red spectacle, with a hint of polar and low latitude surface details. It was an excellent evening of observing, enjoyed by all.

Partial Eclipse Observing: GKWJ made the Dome available for Friends to view the 13% partial solar eclipse. Just six visitors (four humans and two canines) came to observe the eclipse during the two hours from first to last contact. GKWJ took the opportunity to experiment with a projected live view from the 10-inch in the warm room, with success – see pictures below: 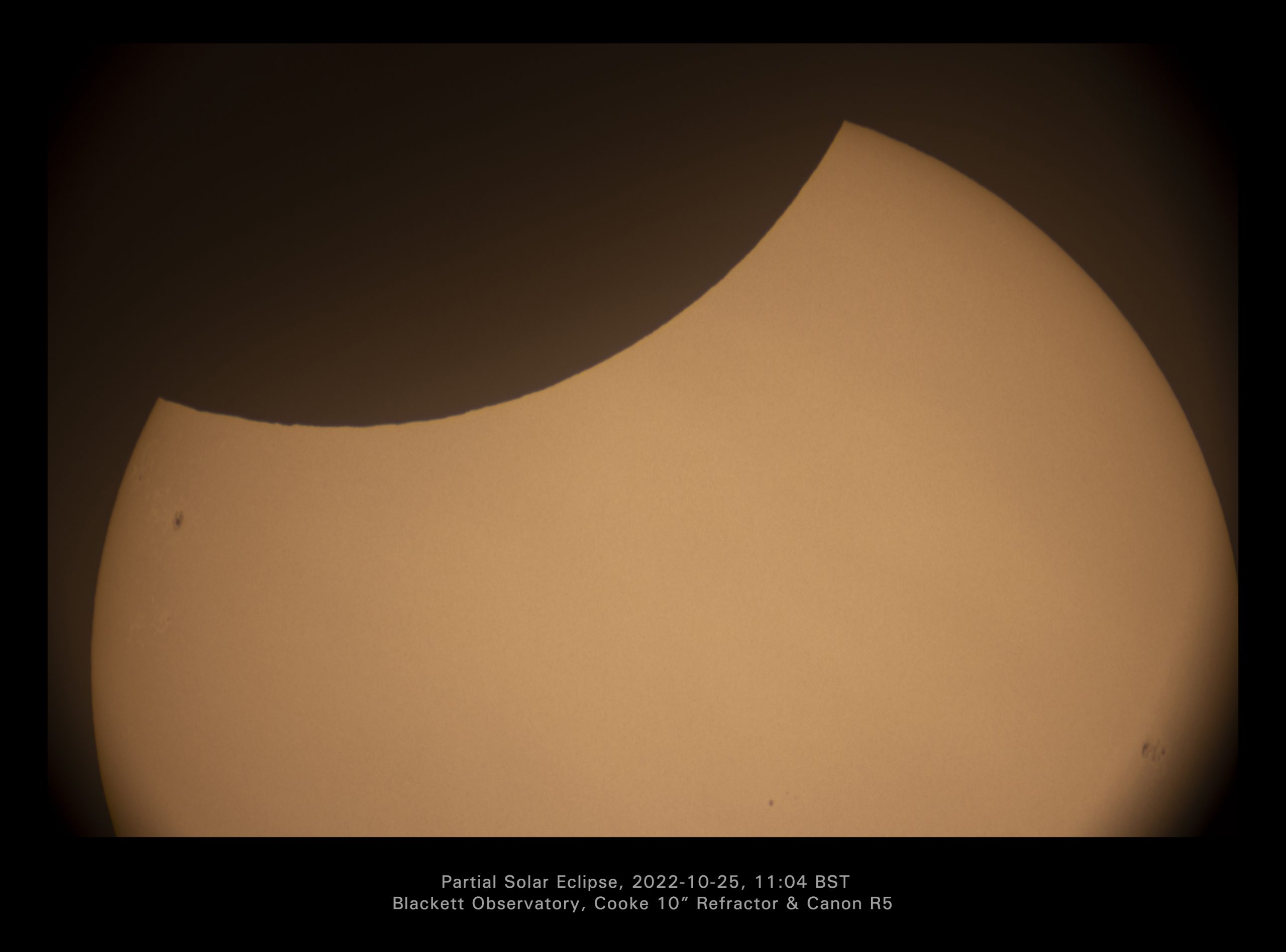 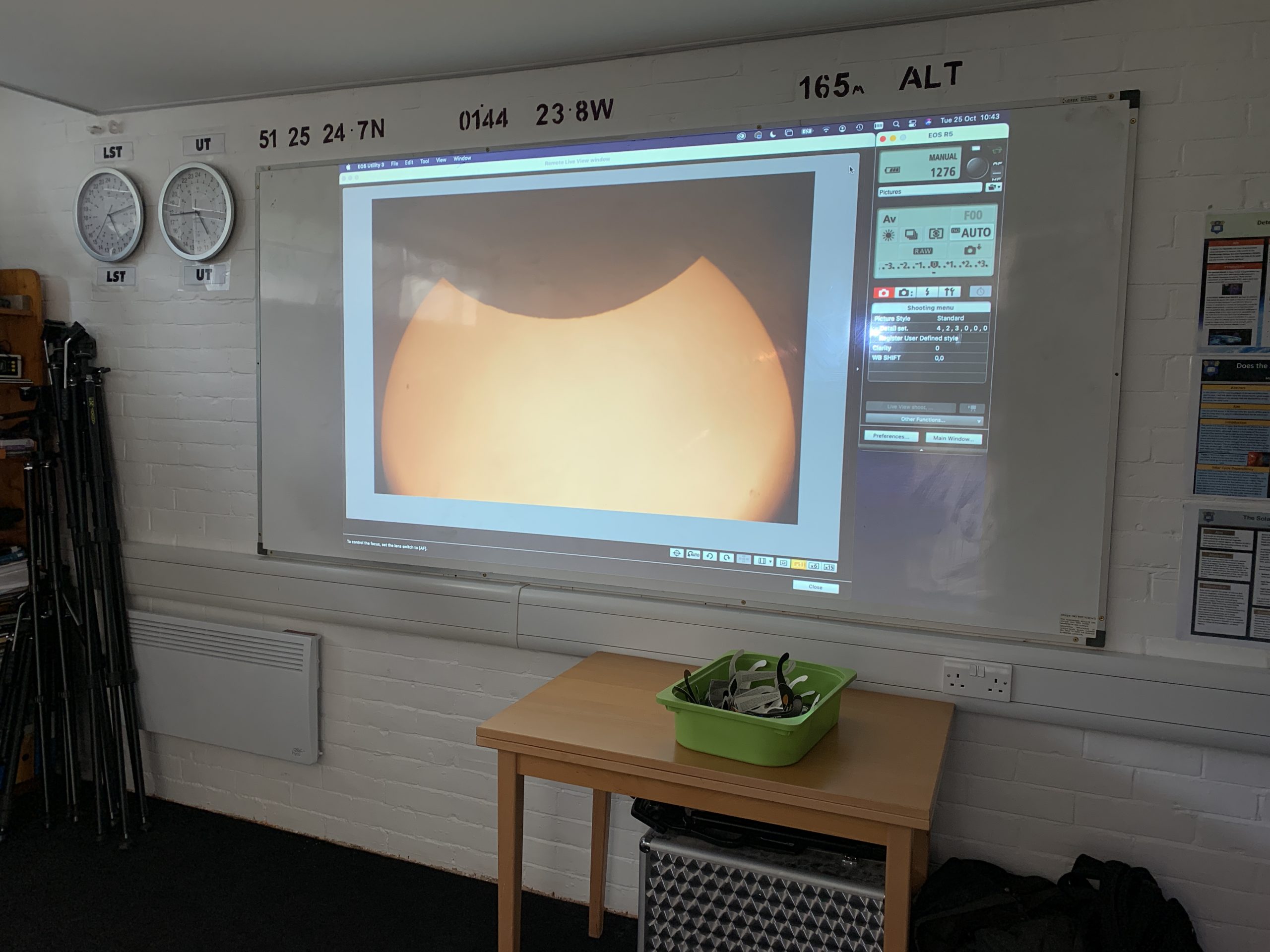 Planetary Imaging: GKWJ attempted to image the transit of Io across the disk of Jupiter through the 10-inch. Conditions were sub-optimal, with much haze and moisture in the atmosphere, so results were acceptable, but not spectacular!

GCSE Observing: 13 Remove Astronomers and 1 Remove pupil (working on a Higher Project Qualification) joined GKWJ at the Dome for an observing session. They were given a sky tour and then made sketches of the northern portion of sky to include Polaris, the Plough and Cassiopeia with a focus on estimating the altitude and azimuth of various stars. In the 10-inch, they observed Saturn with four moons identified (Titan, Rhea, Dione & Tethys), Jupiter with three Galilean moons visible (Io, Ganymede and Callisto) and ended with a detailed view of the bright 98% Full Moon